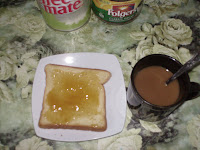 My everyday routine is waking up 4:30am in the morning even if I was up late the night before. After preparing my children to school, I normally go back to bed for another 3 or 4-hours sleep but not this morning where I slept only for an hour. Last week I had a very bad dream, it was actually a nightmare. I really don’t know why bad dream usually happens to me in the morning. Today, I had one of the worst dream ever. I woke up so scary, so I just kept myself awake and had breakfast, thinking if what was happening around me was real until I finally convinced myself that I wasn’t dead. I had my breakfast, a cup of coffee and slice of bread, and Magic was beside me, staring and having his breakfast too.

I started my day today in a quite different way. I made a little research why nightmares usually happen in the morning.

“Nightmares, and dreams, happen during REM (Rapid Eye Movement) phases of sleep. During the night, the brain goes through several stages of sleep and around every hour and a half switches into a REM phase. REM sleep phases last longer as the night goes on – which is why most dreams and nightmares happen towards morning.”-NHS

I am not convinced yet why it happens to me in the morning. Maybe because of my bad sleeping pattern. I will share later about my nightmare in a separate post.

Have you encountered bad dreams or nightmares too?

5 thoughts on “nightmares in the morning..”