This week theme for TCP is order in the court!! My entry is My Cousin Vinny. 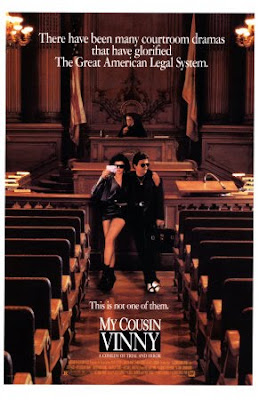 I seldom watch movie with any courtroom scene, but when I saw this movie with a touch of comedy, I became interested and watched the film. I also love Marissa Tomei whom I admired most in her movie “Only You” with co-stars Robert Downey Jr.

My Cousin Vinny is 1992 film starring Joe Pesci, Ralph Macchio, Marissa Tomei and featuring Fred Gwyne. Tthe story is about two young New Yorkers who were put on trial they did not commit. Tomei won an Oscar for Best Supporting Actress in this movie.

I am excited for TCP next week. I am so in love with Ryan Gosling right now and will feature him for love story theme next week.