As usual, classes were suspended late today when the students were already at school. My younger daughter who is attending an afternoon session was lucky to just stay up late in bed while my older daughter called me up from school and said that she’s on her way home and can manage to go home by herself.  The flood is just an ankle deep.  Before lunch time, my older daughter, armed with umbrella and jacket came home dry with no typhoon to blame of being unprepared. She said that she saved a hundred pesos for the allowance, except that she already ate her packed lunch and it was only 10 am.

As early as 8pm today, DepEd announced suspension of classes tomorrow from elementary to high school. I guessed PAGASA learned their lesson today.  Oh well,  it is better to suspend classes  early even if  it  shines  tomorrow  than  go again with the same scenario today.  Whatever.

Anyways, I got this photo op of high school students in front of our house this morning. These boys thought they were lucky to find their way walking in the gutter, supported with their hands holding into the gate. Just about few meters away from the highlands, (literally high land and no flood) everybody stopped with the disturbing sign, “Beware of Dogs.” They stayed in that position for a couple of minutes and thought about how to pass by the next gate safely. Nobody tried. They all chose to walk in ankle deep flood after ten minutes. 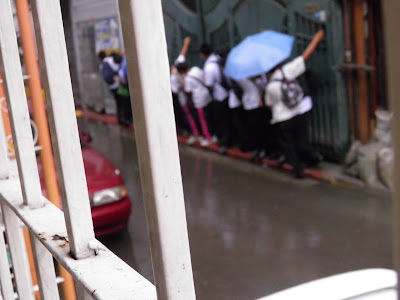 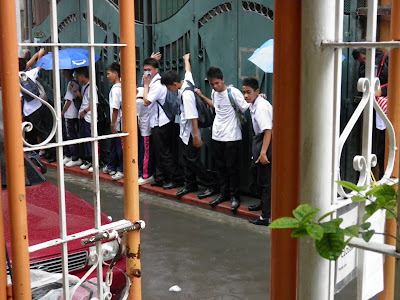