I was on hiatus for a couple of days. I thought I was seriously ill and had to go to the clinic because of my condition. I had a difficulty in breathing and I concluded that I had a heart problem. When I searched online about  this ill feeling, I was surprised that  it was a heart burn. I’ve found out that chocolate, fatty/fried food, caffeinated drinks and pizza  are the main  causes of this illness.  No wonder, all these I’ve mentioned were  frequent on the table during that week.  I ordered two family size  Tuscani Pizza online by which we almost consumed in one eating.  Imagine it’s just the three of  us  during that  weekend.  After that heavy meal, ( I actually had four big slices)  I thought  that  my  blood pressure started to rise again.     I  immediately  took   my  sphygmomanometer  and  checked the BP myself  but I found out that  it was normal.   I  started to lessen the food that causes  the acid reflux.  My kids thought of not eating pizza at least for a  month. We have had enough of it and  we couldn’t take another bite again, at least  in the next couple of  days.

Over the counter medication is available and it gave me an immediate  relief in just one  dose of treatment. 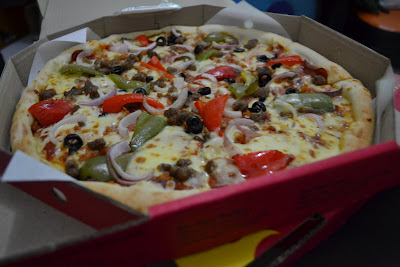