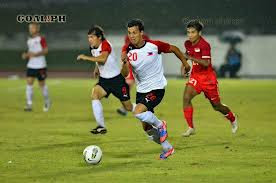 Azkals vs Lions before Suzuki Cup 2012

The game at Cebu City Sports Complex where Azkals met the Singapore Lions last November 15 was the last friendly match before Suzuki Cup but it was a  great game like a big fight.  Football fans almost filled the sports complex and that signals how  far football has gone in the country.  The friendly match  was held at Cebu and the fans were amazed  with  how the Azkals defend themselves against the Lion.  I  was actually in my friend’s house for a birthday party but I made my way to watch the game too.  I requested to switch the channel  where the play was telecast  without  considering  everybody   in the house  watching soap opera.  I am a soap opera addict too, but given an option, I’ll choose football without any doubt.  Now  I  am a football fanatic.  Singapore did not get the chance to score,  and ended 1- 0 in favor of Azkals.  Marvin Angeles scored on the 54th minute.

Another game in the opening of Suzuki cup last Saturday, November 24,  was  Azkals vs  Thailand War Elephants.  I was torn  between the three shows,  Kapuso  Mo, Jessica Soho,   Carmina – Zoren Wedding and Azkals vs Thailand War Elephant game.  I chose the latter  while everybody else was watching  The Wedding Carmina – Zoren.   I was upset how the game turned out  in many aspects.  Huh!  It was a physical game.  Phil Younghusband suffered a  cut on his  left eyebrow.    Coach Weiss was sent to stands when he was caught  throwing a ball to a Thai  player.  He said that  it  was  unintentional and  what he just  meant to do was roll the ball.   The game ended  with a score of   2 – 1 in favor of  Thailand.  I hope for a better and fair  fight tomorrow where Azkals will meet Vietnam.

Do or Die game will happen tomorrow
Azkals vs Vietnam
November 27, 6:25 pm
Live on AKTV