My Little Bossings stars James “Bimby” Aquino Yap and Ryzza Mae Dizon were awarded as the Golden Kids of Year by the biggest family event of the year, the BABY AND FAMILY EXPO PHILIPPINES 2013, happening on December 06 – 08, 2013 at the SMX Convention Center Manila, Mall of Asia Complex. 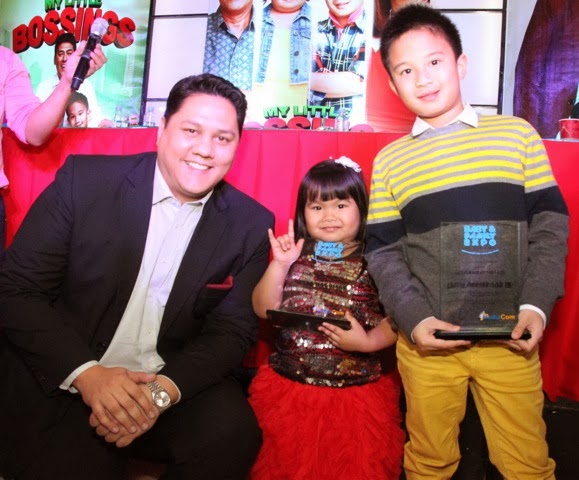 Queen of all media Kris Aquino’s son Bimby and Eat Bulaga Little Miss Philippines 2012 Ryzza won the award for their inspiration to Filipino kids and exceptional talent voted by the online community from the website www.babyexpo.ph. The Golden Kid Award is one of the recognitions in the first ever Golden Family Awards, aimed to recognize celebrity families, parents and kids who have been a great inspiration and role model to Filipino families.

Earlier this year, the eight-year-old child actress was also recognized for her acting and hosting skills as 3rd Yahoo! OMG Awards Child Star of the Year and 3rdEdukCircle Awards Best Talk Show Host. She was also nominated as Best Comedy Actress and Best Celebrity Talk Show Host in the 27th PMPC Star Awards for Television.

Following the footsteps of his mom, Bimby is now very active in showbiz – print and television commercials plus his first upcoming movie My Little Bossings have proven that the child star has what it takes to be in the acting world. “Thank you for the award and the recognition” says Bimby to the Baby and Family Expo Philippines, while Kris Aquino expressed that they would love to be at the awarding on December 7, but can’t be there personally, because of their scheduled trip to Cebu. Kris even posted a thank you note on her www.facebook.com/krisaquino.net page. Ryzza adds “Thank you po sainyo lahat” after accepting the award.

The winners of the award for the Golden Family of the Year are Judy Ann Santos and Ryan Agoncillo and daughter Johanna “Yohan Lois” and son Juan Luis “Lucho.” Moreover, celebrity couple RegineTolentino and Lander Vera-Perez were named Golden Couple of the Year and will be awarded on December 07 at the SMX Convention Center Manila.

The Golden Family Awards is part of the three-day fun-filled event organized by MediaCom Solutions Inc., the Philippines’ leading stakeholders communication and events company and co-presented by Cordlife Philippines, the leading cord blood and tissue banking service provider in the country. The BABY AND FAMILY EXPO PHILIPPINES 2013 dubbed as “Welcoming Life, Love and Care”, is dedicated to nurture family development and child care. It covers the stages of family growth from pregnancy, maternity, newborns, toddlers, early childhood and everything you want and need when planning a family. The event will also feature educational talks and seminars, exciting activities like the Family Olympics and Family Fashion Weekend and exclusive discounts from over 200 exhibitors.

Be part of this star-studded family event by registering for free at the BABY AND FAMILY EXPO PHILIPPINES website www.babyexpo.ph. For queries and updates, call +63.2.843.2174, +63.915.660.8748, email info@babyexpo.ph and join the community at www.facebook.com/babyexpoph and www.twitter.com/BabyExpoPH 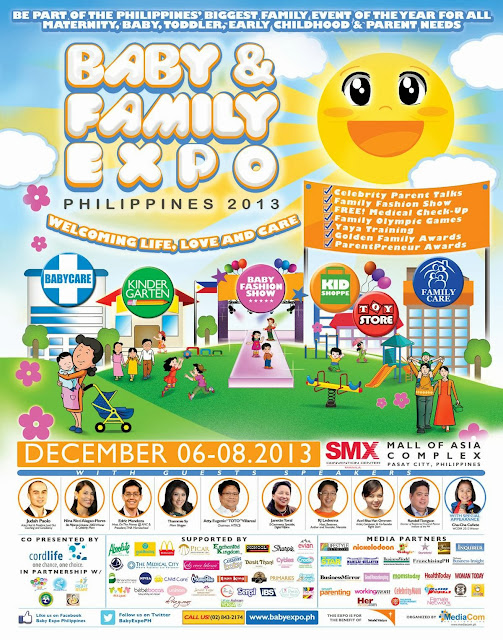