I already blogged them, the band that is now making an online trend, the Reo Brothers. They are survivors of typhoon Haiyan from Tacloban and use their talents to rebuild their own lives. As I watched the video, I can’t help but be inspired to their story and spread the news because I believe that they deserve a break here in the music industry. They decided to move in Manila, armed only with their instruments like jasmine by takamine guitar and their extra ordinary gift of singing. What was left with them back home was nothing but hope and that leads them now to a new career. At first, they were scared of what would be waiting for them in the new city, their new home. But their first performance left the audience in awe and finished with standing ovation. They are now performing in a bar every Tuesday for their regular gigs.

I will support them in anyway I can. This is truly an inspiring story that there is still hope despite that tragic event in life. Survivors rise to the challenge and that no storm can bend them down.

I just can’t get over with this band, Reo Brothers. Their talent are just too good not to share. I just watched them at ABS-CBN Solidarity concert “Kwento ng Pasko” where they performed Beatles hits, “Here comes the Sun”, and “Hey Jude.” I was busy with other things when I heard them perform  cover songs of Beatles.  I dropped my work and watched them as they brought the Araneta Colliseum down.  It was such an amazing performance and gained a standing ovation from the audience.  The crowd requested for more and kept requesting song after each song.   Now I have another band to follow,  the Reo Brothers.  They are just so so amazing.

I was searching for ABS-CBN’s video, unfortunately, the video is not available for sharing. So here’s another video,  not of good quality audio but you can view and hear clearly their   extra ordinary talent.

And watch how Reo Brothers started to rebuild their lives in Manila.

The band, composed of brothers Reno, RJ, Raymart and Ralph.
The Reo Brothers are from Tacloban City.

Philip, Lifestyle Guy announced his website, Lifestyles-philipabadicio.com during the event, Eat Your Heart Out which is soon to launch this coming Tuesday. 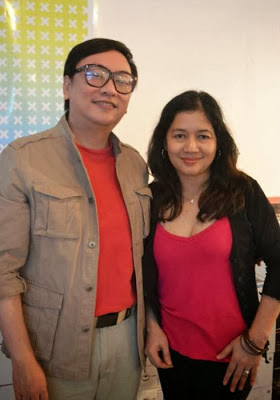 Philip is behind the successful campaigns of his clients lifestyles products and brands. As a PR man, he mastered the ropes of lifestyles industry. He is the editor-in-chief of the online lifestyle source, STYLERPA.com RPA is an acronym for real, personal and all-that style.

Have a break from every day drama. Watch Philip, Lifestyle Guy every Sunday 11 am to 12 at TV5.

Taking care of your musical instruments

Like your most priced jewelry,  take good care of  your instrument  like  your  most valuable  possession to.  The more care you give, the longer live it will serve.

For  guitars,  never leave it in a dusted place when you’re done strumming it.  Put it in a bag or hang it.

As soon as you see a little damage,  have the parts repaired and  replaced at once  with the same  quality too,  like spirocore silver c,  in case you need a replacement.  Check some stores that offer the same quality item.

Likewise, check the website for detailed  steps when  cleaning guitar.  Because it needs a professional to tune it,  be careful when you loosen the string and ask assistance  from someone  who’s an expert in tuning in this instrument.

Cleaning the dust is not as easy as it seems, so  check guide on how to properly do it. Videos are easier to follow, you may want to consider it too.

Do not use any chemicals that  may harm your instrument. There is a certain cleaning liquid  to use for maintenance.

“Mona Lisa”  the only word I could say if someone would ask me about  Leonardo da Vinci.  With that, I would hide myself in shame not knowing more of his genius work.   After our trip at the museum,  perhaps, I could say a thousand word  now  to describe  about  the world’s  famous  inventor, scientist,  artist, musician, architect and beyond.

We  witnessed the last day of   Da Vinci, The Genius exhibit at The Mind Museum and one of those that caught us is the bridge of Safety as Da Vinci described. 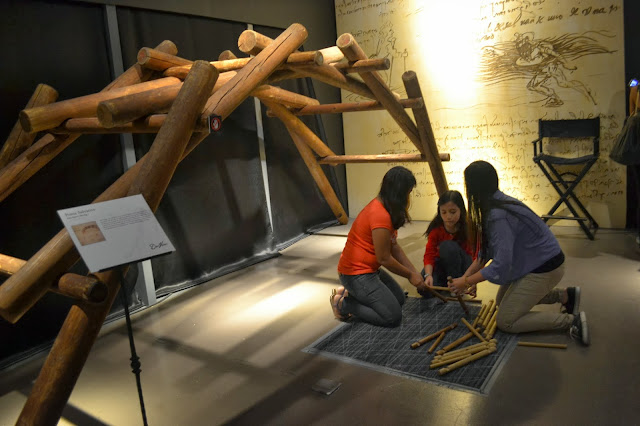 “This bridge was designed to be erected quickly under battle conditions, Leonardo’s idea was that it could be constructed by a group of soldiers in an emergency, using small tree trunks found on the edge of a river.  The trunks are interweaved and braced without use of ropes or nails in such a way that the more downward pressure is applied, the more the braced pieces of wood interlock and the more secure the construction is. Leonardo called it a bridge of  ‘Safety’.”

And my two children tried their luck to build the bridge with the help of their cousin. 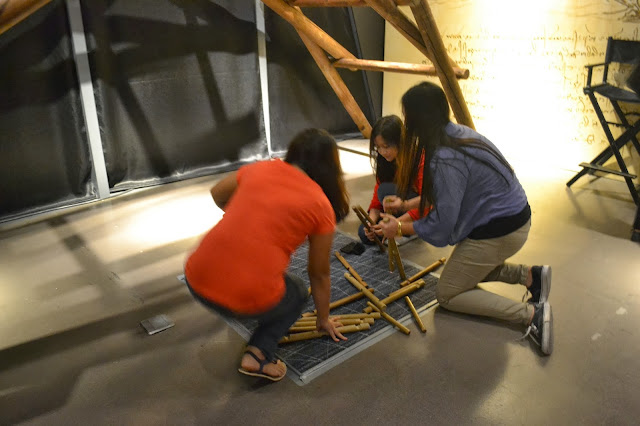 And figure out how to rebuild.. 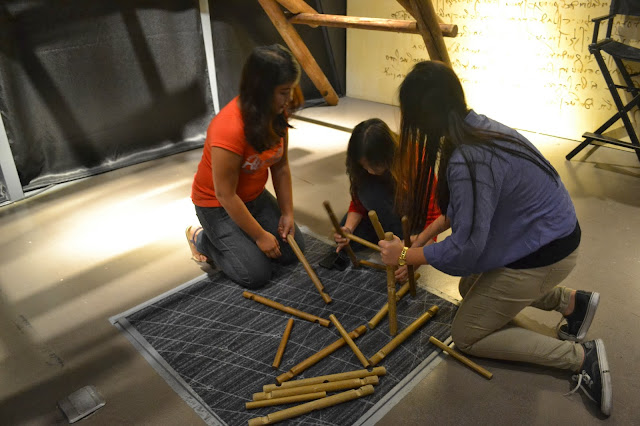 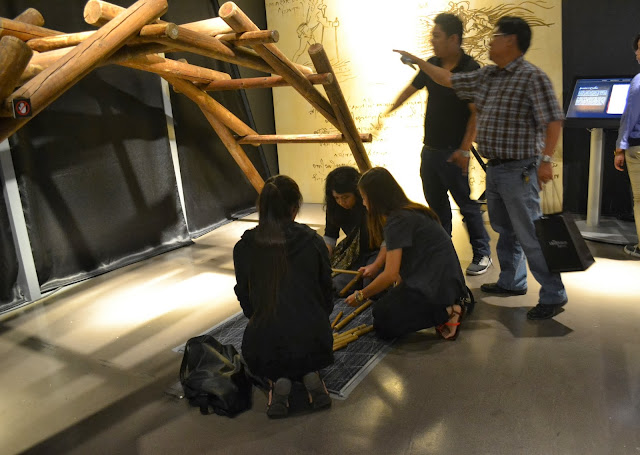 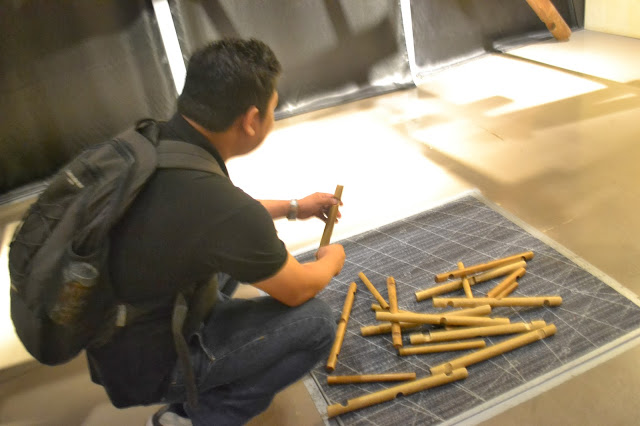 and maybe given few more time.. they could 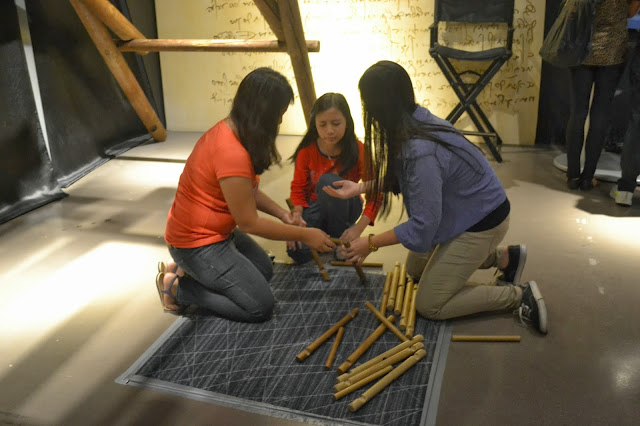 build this replica.  And I wonder how all these were made into an emergency bridge.  With no internet and Youtube help,  I cannot contain the admiration I have with  the genius man  who  know how to create the emergency bridge with no ropes, no nails  but was made it stronger when interweaved. 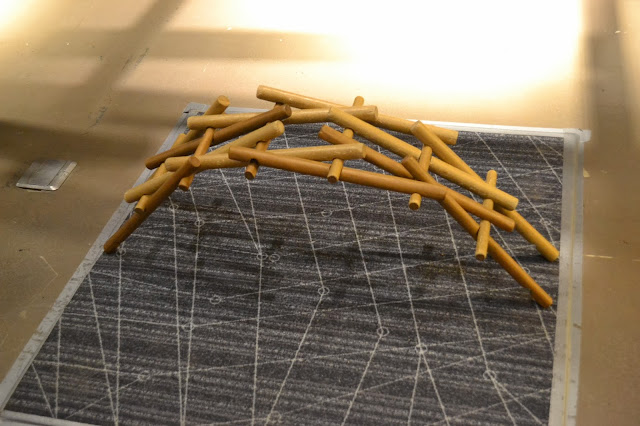 Now,  I want to  see the Leonardo da Vinci  Museum next to my main purpose and other list of  things to do when in Milan.   Of course, it won’t happen, so I just keep imagining  because  only imagination could take me there.