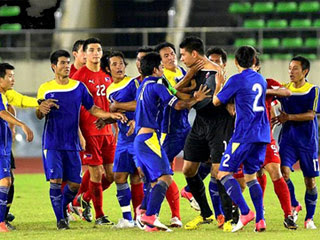 It didn’t surprise me at all to see a headline that Azkals versus Laos friendly match was invalid.   I was really disappointed with the game that night, not only with the result but how the Laotian played and how the referee became so  biased.  Ok, I am not an expert here but I think it doesn’t need to be an expert in football to know what went on during the entire game.  First off, Laotian didn’t want the game to be live. Why? At 6:30, I was already in front of  TV  for the kick off  time but it turned out delayed and watched the Singapore VS Azkals replay instead.  The telecast started past 8pm.  I was not at the stadium but I thought that something fishy was happening  when the argument started between the two teams and  the camera was diverted and  pointed out to the audience.

Read the full article at teampilipinas.info and find out more details why FIFA ruled out the game as invalid.

“Indeed, not all four referees were from FIFA which is a must for an official A-match,” FIFA wrote in an email Tuesday night.

Oh my dear Misagh, he was badly hurt.  I heard  that Laotian punched his face while he tangled off the  ball but the  referee even gave him a red card.  It should be the other way around.