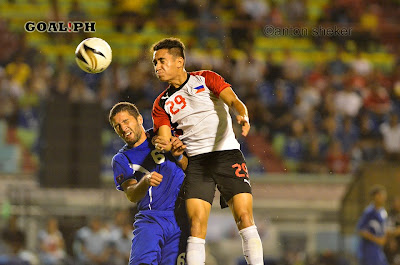 The result of the game last Tuesday, September 25,  Azkals VS  Guam,  1 -0  at the Rizal Memorial Stadium   lifts the confidence of  players  for the opening of  Philippine Football Peace Cup 2012.  The team proved  that they could  score a goal themselves even without the superstars,  James and the striker  Phil Younghusband.  As a football fan, the result  was  good enough,  regardless of the the score because 1 -0 is  still a win.    Patrick Reichelt scored  a header on the 81st minute and it was a right timing  on the perfect spot.

The game  minus  Etheridge,  Shrock and the Younghusband brothers brought the football fans all eyed  on the new breed  of  players, thus it made the team  work  hard and  display  an impressive skill.  They should,  it’s  their time to shine  while the  Younghusband brothers were not around on the pitch.  I missed  the  superstars in this game especially during those moments  when  there were a lot of missed chances and opportunities.  I spare my space from that  issue why they were not included in the  Phil Peace Cup.  I  have no direct source so I   speak only  from what I heard and watched  on TV  and internet.    Anyways,  Sacapano, though lack of height has played  well  and has now become   an  efficient  goalkeeper.   The happiest  was  Coach Weiss  who obviously showed  a very  satisfying and happy face  on a camera  when Patrick Reichelt  scored a header.  That  lucky score spared him  from football fans and critics  regarding  the decisions he made for the line up.

The Azkals played well last Tuesday  and they   proved that by not giving a chance to a less stronger team, Guam.

Lets’ see later tonight again  for another  game without the Younghusband,   as   Azkals  will face Macau,  live via Studio 23. Kick off time 7:30

The photo above is not mine. I did not ask permission  to post  so I might take it down when asked me to,   giving him a  full credit anyway.