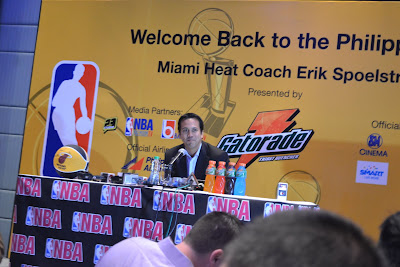 Last Thursday, August 2, 2012, I attended a  press conference at the Mariott Hotel, Resorts World Manila. Different group of media attended the press con and were given a chance to ask some questions to the Head Coach of Miami Heat.  As soon as Coach Eric entered the venue,  he greeted the crowd  “Mabuhay.”    He said that he was very excited to be back in the Philippines and it was his  fourth time to be back  as NBA ambassador.  He cited that he traveled with his trophy and just proud to share to the Filipinos the NBA victory. When the media’s turn came to ask a question,  my very good friend Joy of  occasionsofjoy.com grabbed a chance to ask a few questions.  She asked how winning the NBA championship changed his life.  He said that nothing really changed and he added that he remains the same and stays humble but he still needs to work harder this time.  He mentioned that a bit change comes  in terms of  hiding identity when he is sometimes  out  in public by wearing a baseball cap,  but not the to the extent of wearing a fake mustache. 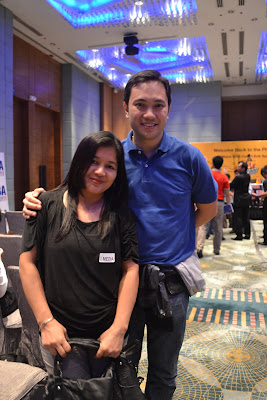 After the quick press con, Coach Erik immediately  left  while some media went out to get a way for a one-on-one interview.  I grabbed a chance to have a photo with TJ Manotoc  instead of Coach Erik,    news anchor and  sportscaster of ABS-CBN.   No doubt, he’s popular among women.  He’s not only handsome but  intelligent as well.

Coach Spoelstra will be in town for a week. You can catch him at different SM malls for other activities. Please check the website www.facebook.com/philsnba or www.facebook.com/GatoradePH  for more details.

Linking this entry to Color Connection.